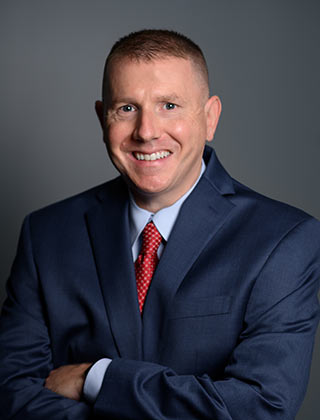 Wes P. Henderson is the founding and managing member of Henderson Law, a boutique litigation law firm located in Crofton, Maryland. Mr. Henderson has over 15 years of legal experience representing clients, and has a past record of obtaining successful results on behalf of his clients.

Mr. Henderson works tirelessly to secure favorable results for his clients without having to file a lawsuit, but remains poised to file a lawsuit and proceed to trial, if that course of action is in the best interests of his client. Mr. Henderson is an experienced litigator that brings a unique blend of having represented both plaintiffs and defendants in lawsuits. Mr. Henderson employs his diverse background to successfully work with insurance companies and their lawyers to secure favorable results for his clients.

While Mr. Henderson handles a variety of complex litigation matters, he tends to focus his practice within the areas of legal malpractice, medical malpractice, automobile accidents, and slip and fall accidents within his personal injury work. Mr. Henderson also regularly defends clients sued by their former lawyers for attorneys’ fees.

Henderson Law is above all honest and knowledgeable of the law. They are attorneys who believe in the client's case or they will not engage. The entire firm works with Wes Henderson in providing the client with comprehensive coverage. The firm makes sure every angle of the case is studied and informs the client of the pros and cons of each approach so that the client is comfortable and also has an opportunity to ask and welcomes questions. Henderson Law acts as an agent for those they represent. The firm is experienced in legalities of all situations; the writing of a letter to appearances in court. Henderson Law wins cases honorably."

Wes Henderson and his associates were very helpful to me in resolving a dispute with a former attorney that I had retained and who subsequently performed poorly. It is not easy to find an attorney who will take on other members of the legal profession. Henderson Law is a great resource for anyone facing problems with an attorney. I highly recommend them"

Outstanding service and professionalism. Wes and Patrick always responded to phone calls and made sure I was aware of everything that was happening. I highly recommend their services. I trusted their judgement and I was not disappointed. If they sign up to help you, consider yourself lucky. I can not thank them enough for their help and expertise. Job well done!"

This law firm cares about the client. We have relied on their professional knowledge and wisdom for years. Mr. Wes Henderson has been accessible. He takes time to listen and understand all of our expressed concerns. He has kept us informed through out the process. He has gotten successful results for us. We are happy to highly recommend this team to represent our community."

We had the best possible experience working with Wes Henderson. He was professional, knowledgeable, honest and personable. His expertise was invaluable for our situation. It was honestly a pleasure, in the midst of difficult circumstances, to know he was for us and working not just for "the best at all cost" outcome, but the "right" outcome for us. Wes also impressed us with his willingness to collaborate with attorneys who had other areas of expertise. He comes highly recommended by us."

I am delighted to give my “5-star” rating of Henderson Law. In late 2015, I sustained a personal injury in Maryland. After a year of procedures and healing, I knew I needed to try and secure some compensation to help pay for my injuries as well as call the owner’s attention to the hazard. Thanks to a friend’s recommendation, I found Wes Henderson, who listened patiently to my story, reviewed my photos and evidence, and decided that he would represent me in my claim and ultimate lawsuit. I wouldn’t say that pursuing a lawsuit is ever easy, but Wes and Patrick made me feel that they sincerely cared about me. I will be forever grateful to them – as well as Katie, their assistant, who was also a great support."

Henderson Law was very professional and prompt in resolving a matter for my family. They were courteous and treated us with respect. The associate took his time to explain the process and thoroughly answered questions. Apart from meeting in person we also corresponded via email. Responses were always prompt and complete. I highly recommend Henderson Law."

Extremely polite and professional staff Mr Henderson was compassionate as well as very knowledgeable regarding the law He made himself available to any questions or concerns and was most prompt in returning calls and responding to emails. It was a pleasure to be represented by such an ethical law firm"

Schedule A No Obligation Consultation